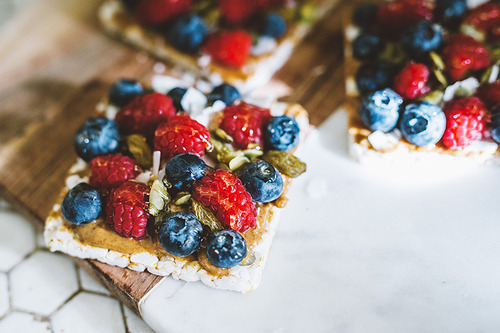 I never really settled on a name for this summer snack and I finally gave up on trying to come up with one. I realized my old habit of calling these “fruit cakes” was extremely misleading when I let it slip and had to watch a friend’s brow furrow deeper and deeper as I listed out the ingredients. No flour? Eggs? This isn’t a baked treat to be enjoyed with coffee?

Well, not entirely, though I do recommend having a cup of coffee handy after throwing these together.

I eat these… fruit pizzas???… morning, day and night when berries are in season. Over the summer last year it was my go-to dessert while trying to make better choices in life. It’s a breakfast snack to be munched on while the coffee’s brewing, as well as my lifeblood on camping trips. 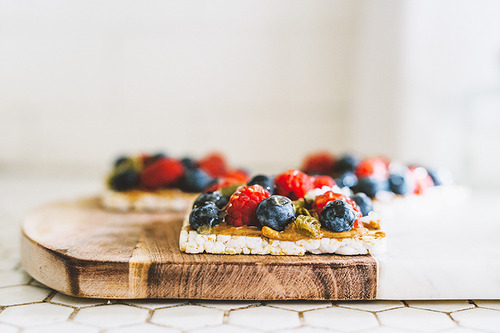 The idea is simple: smear almond butter on a rice cake. Top with thicc coconut flakes, fancy golden raisins (the other kind remind me too much of being poor) and pumpkin seeds, pile on the berries, drizzle some honey or maple syrup and – if you’re feeling xxxtra fancy – a sprinkle of flax meal.

I haven’t deviated much from the original, though I did opt for thinner rice cakes to avoid excess carbs. Feel free to experiment with other berries, nut butters and toppings. For whatever reason, the golden raisins seem to be an unassuming VIP – I don’t recommend omitting them.

H/T to my girl Kelsey who came home from a camping trip last year, raving about this new treat she invented. Kelsey went so far as to haul all the ingredients into my kitchen to make a few for me to enjoy on the spot. I’ve been hooked ever since.