While I don’t remember the first time I ever had a Whole Bowl, I can perfectly remember the day I learned how to make Tali Sauce. It was a summer evening and I had a craving. Food carts were nearing closing time as I sat at my kitchen table on the verge of becoming hangry. So I did what any child of the Internet would do: I turned to Google.

Call it what you will: Tali Sauce, Northwest Sauce, Yum Sauce… If you’re from Portland you’ve probably had one of its many variations, or something close enough. And in all its myriad forms, surely someone, somewhere has tried to recreate this sauce, right?

The Internet didn’t let me down. (It rarely does, FYI.) With a couple tweaks to the most popular copycat recipes floating around out there, this sauce quickly became a staple in my kitchen. An easy meal to turn to when I’m feeling cheap, lazy and most of all – bogged down by all my recent adventures in gluttony.

And if we’re being completely honest here, I haven’t had an actual Whole Bowl since that fateful day in my kitchen 2+ years ago. So I really can’t verify whether or not this is a true replacement for it, or just another yellow protein sauce dished up in the PNW. It obvs satisfies the craving, though, so does it really even matter? 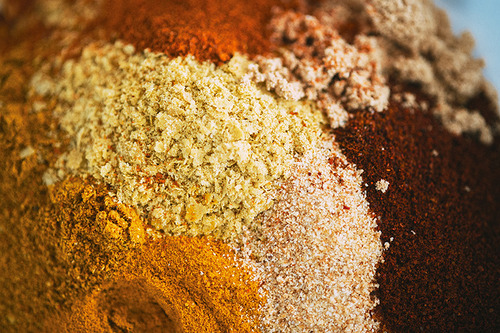 So, what did I tweak compared to the rest of the Internet? It’s nothing major, really, but a few things worth mentioning.

First, mustard in any form is unnecessary, especially mustard powder which isn’t something most people keep in their kitchen. You get plenty of tang from the nutritional yeast + lemon juice 1-2-punch, so don’t worry and certainly don’t make an extra trip to the grocery store for it. I’ve experimented with mustard powder, yellow mustard and dijon mustard. It ranges in that order from Barely Detectable straight to WTF, NO!

Plus, I have it on good authority that there is no mustard in the original Tali Sauce, anyway (thanks Keli!).

Second, I once ran out of garlic cloves and attempted to use garlic powder in its place. Being notoriously bad at the maths, I accidentally used 4x the amount of garlic called for. And you know what? It was 4x as delicious. Lesson learned: More is more. Unless you’re a vampire, in which case, you’re on yer own. In the case of almonds: No, I don’t know why it’s necessary to blanch and peel the almonds and no, I’ve never used slivered almonds. Despite all other evidence on this blog that points to the contrary, I’m a follow-the-recipe girl. I like rules, and order, and I don’t really ask questions when presented with a tried-and-true method.

That said, blanching almonds is easy – fun, almost! (Almost.) All you do is cover the almonds with boiling water for ~10 minutes, then pop the little skins off. You can’t even really call it peeling. Peeling sounds dull and boring and makes you think of punished cartoon soldiers wading through a mountain of potatoes. This is better than that.

Just don’t buy roasted almonds. I can’t guarantee you’ll have fun peeling your almonds, but if you buy ‘em roasted, I can guarantee you will not have any fun and probably hate me for making you try this. Finally, almost every recipe I’ve come across calls for ½ cup of garbanzo beans. That’s so annoying. I mean, I get it – you’re making a recipe for the first time, you don’t really know if it’s going to be any good. It’d be a shame to dump that WHOLE one-dollar-twenty-five-cent can of beans into the food processor for something that might royally suck, right?

But lemme tell you somethin’ – half a can of anything is gonna get a one-way ticket to the back of the fridge. You know it’s true. None of that nonsense here. This recipe is for a double-batch, so whip out a good sized tuppy to store it all in ‘cos we’re goin’ hog wild, bb. So what’s the end game here? Well, if you’ve never had a Whole Bowl lemme fill you in. It’s one of the highest forms of peasant luxuries, right up there with bread and butter.

In its simplest form it’s merely beans, rice, salsa and creamy avocado. In short: a burrito without the tortilla… with this delicious and tangy, protein-rich sauce slathered everywhere.

Sound easy? Too easy, I know. But as you might’ve already guessed, the whole bowl is most definitely greater than the sum of its parts.

½ cup Almonds, blanched and peeled (just do it!)

1 can Garbanzo beans, drained and rinsed

I like to have mine with short grain brown rice, black beans, melted Daiya, fresh pico and half an avocado each. Heavily lime juiced, generously salted.

I used to go the sour cream route, but after a 2-week detox that cut out dairy I realized I could live without it.