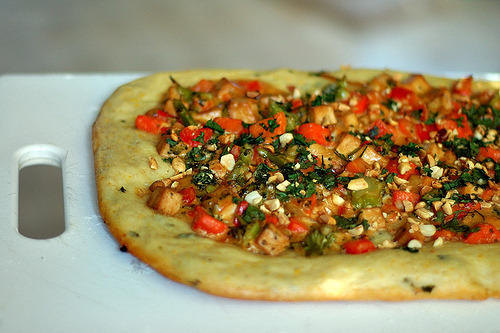 Ever since school started back up I had to take a bit of a break from any serious cooking. My pantry full of canned soups, pastas and rice is proof of what a busy semester I’m having. But a canceled class at the start of the weekend meant I had extra time to make something worth blogging about. I had been eyeing the recipe for Thai pizza in Vegan World Fusion Cuisine for a long time, but just reading the directions made me tired, and the very idea of this recipe kind of embodied everything I hate about being in the kitchen, so I wasn’t quick to give it a try.

It’s really too bad I didn’t make it sooner, because there is nothing about this pizza that isn’t delicious. It’s called Tat Tvam Asi Thai Pizza and uses VWFC‘s Universal Spelt Foccacia and Hari Jiwan’s Coconut Sauce recipes as well.

Tat Tvam Asi translates to “That Art Thou.” In a nutshell, it means we see the Brahman in everything, and in identifying with the Brahman in ourselves, we recognize that all others are essentially identical with ourselves.

So like, let’s get ready to become one with this pizza, yeeeaaah? 🙏🏼🍕

I didn’t stray too far from the recipe, but definitely made some changes to fit it with my tastes (and budget!). I’m definitely interested in making the sauce without the lime leaf and seeing how much of a difference it makes.

Don’t be discouraged if it looks like a lot of work. It is work, but not too much; especially if you have a helper handy to take care of the dough. It also leaves a lot of leftovers which don’t get soggy or gross even after a couple days in the fridge.

The basic order of preparation went like this: First, my partner prepared the dough. Then I marinated the tofu, cut and steamed the veggies and sauteed the onion simultaneously. After the tofu was browned I added the steamed veggies, and then began making the coconut sauce. – Place basil and cilantro in a small bowl with olive oil, salt, pepper and pepper flakes. Whisk together and let sit for approximately 20 minutes.

– Meanwhile, place sugar and water in a larger bowl and whisk until sugar dissolves. Add the yeast and let sit until it begins to bubble. Add the oil mixture and emulsify. Add flour and cornmeal, then knead it into a ball, cover with a towel and let sit again until it doubles in size. Pat it down, knead back into a ball form, cover with a towel and let it rise again.

– Divide dough into two balls and roll to fit your baking pans. I only have rectangular sheets, so I had a rectangular pizza! Round or rectangular, it all [luckily] tastes the same! Place rolled dough onto two well oiled baking pans and set aside until needed. – Before chopping the veggies, pour some Shoyu into a bowl and marinate the tofu. Cover bowl with plastic wrap and shake vigorously every so often while channeling those old Shake ‘n’ Bake commercials 🙂

– Steam all veggies except the bell pepper according to your preferred method. I use a rice cooker– you may have a stand alone steamer or simply a pot over the stove top. Meanwhile, place oil and onion in a medium pan and saute. Once onions begin to look translucent, add tofu and fry on medium heat until the edges start to brown. Add steamed veggies, garlic and ginger and continue to cook over low heat while the sauce is being prepared. Just before it’s time to add the veggies to the sauce, add the bell pepper. – Place all ingredients in a small pot and simmer on low heat for approximately 15-20 minutes. Stir occasionally to prevent sticking / burning, and don’t forget to remove the leaf!

Finally, after everything has been prepared, I carefully added the veggies and tofu to the coconut sauce. Using a slotted ladle I spread the mixture over the dough, leaving borders around the edges for a crust. There was quite a bit of coconut sauce left and it was too tasty to pour down the drain, so I saved it for dipping our crust into. Both pizzas were then topped with the cilantro and peanuts reserved for garnishing. Placed on the middle rack and baked at 375 for approximately 20 minutes, or until delicious.

It sounds even more overwhelming all typed out, but you can easily do many things the day before to cut back on the work. Tofu can be marinated overnight, veggies chopped ahead of time. Even the sauce keeps really well refrigerated in a tight container.

I’m not sure how often I’ll have the energy to make this, but it’s a definite keeper. And heck, the coconut sauce alone is worth keeping on reserve in the refrigerator for pouring over rice and veggies. Yoooooom!