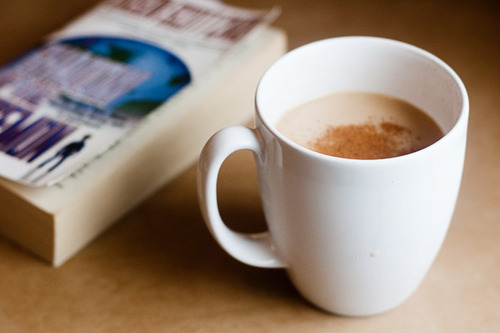 Recently, my love affair with coffee has expanded into territories greater than it tastes good and keeps me awake. It all started with the Chemex; I have always been interested in the slow food movement, and the Chemex seemed like a great way to start. Plus, it’s all food + science + art… How can you go wrong?

Oh, that’s right– it needs filters! That little detail has kept me at bay (for now), because above all, I like to keep it real and by “real” I mean I am too forking lazy to go hunting around for a special series of filters.

Then I found a French press at Goodwill for a few bucks and have been testing the waters with that. It’s not the fanciest by any means (and I even cracked the lid my first time using it. Oops!), but it gets the jyurb dun, makes better tasting coffee than I’ve ever made at home, and is easy to store.

Now, I love a hot cup as much as the next person, but I’m also hopelessly addicted to cold coffee drinks. Yes, even in the winter time. I blame my hot lil furnace of a body. Honestly, I could sweat in the middle of a snowstorm.

Anyway, I was one of those fools who thought they were such a smarty pants because I’d brew a cup of coffee, stick it in the fridge for a few hours and enjoy it with my milk and sugar later in the day.

But get this– did you know you can actually put coffee grounds in your French press, add cold tap water, stick it in the FRIDGE… OVERNIGHT… And it will come out the next morning smoother and tastier than ever?

And, according to smitten kitchen, if you brew it in big batches, it will still taste as fresh as the day you made it, even if it’s actually been several days since you made it.

Maybe it’s just because I’m late to the whole science of coffee bandwagon, but my mind was officially blown.

This morning I whipped up a small saucepan of simple syrup and before you could say “Goodbye Starbucks!” I was sipping on a cold cup of vanilla iced coffee.

Since this was such a spur of the moment operation, I didn’t do much planning, hence the remaining syrup in a rinsed out apple cider bottle. I don’t even have a lid or cork for it, so I’ll probably end up putting saranwrap and a rubber band over the spout. Yeah, I’m classy like that.

So, without further ado, here is the recipe that changed my life:

Warning: You may find the simplicity is too much to bear. I hold no responsibility for hospital bills due to eyeballs popping out of their heads, or sleepless nights that may result from wondering how much money we’ve all unnecessarily wasted on iced coffee and extra shots of flavoring.

1. Place coffee grounds and filtered water in your French press. Stir the grounds into the water, then fasten the lid and put it in the fridge overnight, or ~12-18 hrs.

2. In the morning, slowly push down the pump, pour yourself a cup and mix in your choice additions. I like mine with half-milk, and a dash of cinnamon and sugar on top. Since the coffee is cold, the cinnamon won’t dissolve, leaving a tasty little bite to the surface of each sip.

1. In a small saucepan, add all ingredients. Bring to a boil. Mix, if you want– you don’t have to.

2. When the sugar has completely dissolved, remove from heat. Let cool and store in an airtight jar. It will keep in the refrigerator for 2-4 weeks.

The regular ratio is simply 1/3 cup coffee to 1 ½ cups water.